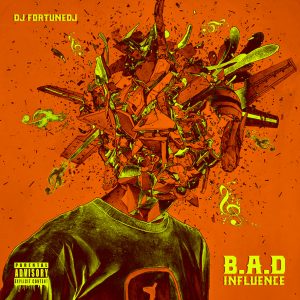 It’s been a long time coming, but it’s finally here. More than a year since DJ FortuneDJ hinted B.A.D INFLUENCE in the middle of 2019, the new album dropped at midnight on Friday (March 27). And as you’d expect, it’s absolutely loaded with A-list fresh talents to feed your ears this quarantine period.
The producer unveiled the album’s cover art a few days earlier, featuring DJ FortuneDJ himself and a number of new artists ready to be unraveled. The new album has no shortage of quality and genre-bending collaborations and the Grandma Records mogul has repeatedly stated that he believes B.A.D INFLUENCE is his best effort and one of the best albums the industry is going to see this year. “I have over 20 artists on this album in just 12 songs. All I can say is, they are good multi-genre music and I hope they get heard.” he hinted. 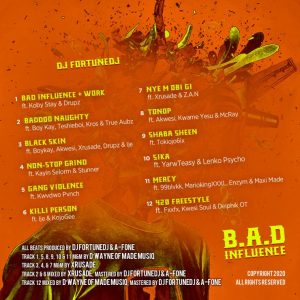 For all the inspiration Disc Jockeying may have given him, however, DJ FortuneDJ is as yet an astonishing curator of improbable collaborative efforts, joining unique forces of culture like Koby Stay and Drupz on “Bad Influence + Work” while putting Kumasi natives and Made Musiq signees Tokiojo6ix on “Shabba Sheen.” In this light, DJ FortuneDJ can connect dots in music and cross-fertilize fan bases, revealing a similarity that solitary he’d known until that point. There are of course the pairings of like-minded artists who are yet to share a song with each other (Yarwteasy and Lenko Psycho on “Sika,” Akwesi, Kwame Yesu and McRay on “Tonop”), which present long-adored artists in a new light, and also a solo showcase (Kwvdwo Pvnch’s “Gang Violence”, a tightly wound fusion of grime and drill music). But if there’s anything DJ FortuneDJ is really showing the world with this project, it’s that the producer’s been doing this quite a while.