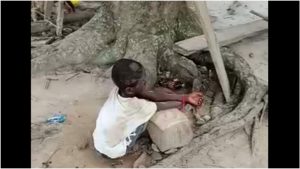 Three persons have been arrested by the Police in the Birim North District of the Eastern region for their involvement in the inhumane treatment of a six-year-old boy.

A video in possession of Star Fm shows both hands of the boy tied with wire cable to the root of a mango tree and left at the mercy of the weather.

The victim lived with his grandfather Opanyin Amekudzi who is one of the suspects at Akyem Ntronang in the Birim North District.

Last Sunday, the grandfather accused the victim of allegedly stealing his Ghc50 but the boy denied the allegation.

This got the grandfather angry, who called the two other suspects yet to be identified to tie the suspect to a mango tree at about 8:00 am till he was rescued at 5:00 pm by the Police.

The New Abirim District Police Commander DSP Peter Ofori Donkor told Starr News that the Police had information about the incident around 3:00 pm on that fateful day and quickly dispatched men to the said house to rescue the victim.

He was subsequently taken to the hospital where he was admitted but discharged the next day.

According to him, the victim was handed over to his biological mother while the three suspects were arrested and put before court on Monday, July, 5, where they were granted bail to reappear before the court on Wednesday, July, 8.