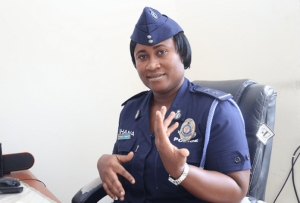 The police have arrested 35 foreign nationals suspected to be illegal immigrants who engage in fraudulent online transactions.

The suspects, made up of 27 Burkinabes, four Togolese and four Nigerians, are believed to have entered Ghana illegally and were also picked up with two Ghanaians.

They were housed in a five-bedroom apartment at Sowutuom, in the Greater Accra Region.

The suspects were arrested after a Togolese reported to the police on June 21, 2021 that he had been allegedly defrauded by one of the suspects.

The Public Relations Officer of the Accra Regional Police Command, Deputy Superintendent of Police (DSP) Mrs Effia Tenge, said following the report from the victim, the police went to the house to arrest the suspect.

Majority of them could not express themselves in English or in any Ghanaian language.

When the police questioned them about what they were all doing in the house they could not give any tangible reasons.

Also when they were questioned about their immigration statuses, none of them could provide any immigration documents in that direction.

Based on that, the police arrested them and the Ghana Immigration Service has since been informed for the necessary action.

Mrs Tenge urged the public, especially landlords, to ascertain the immigration status of foreigners they offered accommodation to and also report to the police if they became suspicious of the activities of their tenants.