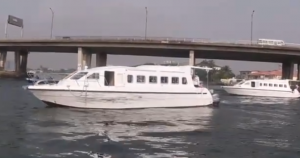 Four people died and 25 were injured Sunday after a boat used in a suspected human smuggling operation capsized off the coast of San Diego, authorities said.

The vessel, a 40-foot cabin cruiser, “broke apart” on a reef near Point Loma, west of downtown San Diego, said Lt. Rick Romero of the San Diego Lifeguard Service.
The boat’s operator was in custody, officials said. No one on the vessel has been identified. Crews are scheduled to continue to their search through the night, the Coast Guard said.

Jeff Stephenson, San Diego sector chief with Customs and Border Patrol, said it wasn’t clear where the boat had come from or what the nationalities of its passengers were.

The incident occurred around 10 a.m. An initial report described a handful of people on board wearing life jackets and waving for help, but rescue personnel on boats and jet skis found more than two-dozen people aboard, Romero said. It wasn’t clear how many had flotation devices.

@SDLifeguards and SDFD firefighters at Cabrillo Monument on the overturned vessel incident. 24 persons were on board. Many patients transported to hospitals. @USCG Fed Fire & many other agencies assisting. pic.twitter.com/jGbfnaRbJh

Multiple agencies including @SDLifeguards rescued 25 people from the water. Sadly, two did not survive. 23 were taken to local hospitals. Federal agencies are still searching the water in vessels and aircraft.

“There were people in the water drowning, getting sucked out by the rip current,” he said.

Life guards pulled at least seven people from the water, Romero said. Four of them died. Others suffered hypothermia and injuries caused by the vessel coming apart.

“The boat was on the reef, bouncing back and forth, and then slowly disintegrated into a bunch of pieces,” he said. “There’s no boat there.”

The incident occurred as Customs and Border Protection and other agencies dispatched more boats and aircraft to the San Diego area in an effort to disrupt maritime smuggling operations.

Stephenson said the agency has seen a jump in such operations in recent years, with 1,200 apprehensions in 2020 – a 92 percent increase from the year before. That spike occurred amid heightened border patrol operations on land, he said.

On Thursday, a smuggler carrying 21 people aboard a skiff was intercepted in the effort, said Brandon Tucker, a Customs and Border Protection official.

Most maritime smugglers typically use smaller boats with less people, he said, though they also tend to be overcrowded and dangerous.