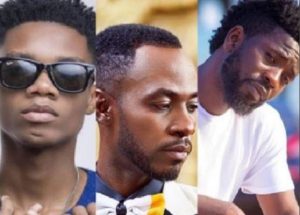 The upsurge of Smartphones has offered Ghanaian musicians the opportunity to make videos without hiring expensive professionals, spend money on pricey studios, equipment, and so on. Serving as a means to express their creativity, some of these artistes have taken it a step further and are in recent times producing real music videos made with just a phone.

Most of which were inspired by the coronavirus lockdown, these music videos prove that one does not need sophisticated equipment or a huge budget to make a decent piece of work.

With that being said, we bring you examples of music videos made with smartphone cameras

Arguably one of Kidi’s most popular songs off his ‘Blue EP’, the video of ‘Say Cheese’ which has become the favorite of most music lovers all over the country was shot with a smartphone.

Kidi in an interview with Nana Ama Mcbrown in 2020 revealed that he shot that particular video without the services of any director. He established that he compiled selfie videos from several ladies during the lockdown for the project.

The ‘rap dacta’ in a social media post revealed that the video of his new song ‘Yeeko’ which features Kuami Eugene was shot with a smartphone.

According to Okyeame Kwame, he shot most scenes with a phone and also directed the video.

‘Yeeko’ is a song that taps into the new wave of drill music being spearheaded by some artistes in Kumasi. The song was produced by Kuami Eugene and was released on January 13, 2021.

Shot in his plush residence in Accra, the Highlife singer in a social media post detailed how he made this particular music video with a phone.

According to Bisa, the ‘Halleluya’ music video was shot spontaneously during one of his usual Saturday parties.

Released in November 2020, the song talks about being grateful to God for every day’s blessings.

This particular video was shot by her brother ‘WanLov the Kubolor’.

Kubolor has for some time now directed and shot a lot of music videos for artistes with his personal iPhone and has got the public talking about its quality.

My Toto (Valentine Sex) was released on February 7, 2017, by the Ghanaian afro-beats singer and songwriter. The visuals of this song were shot with a smartphone.