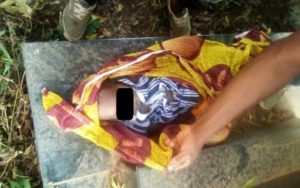 The body of the two-year-old boy

Some angry residents of Netro, a suburb of Mankessim in the Central Region, have staged a demonstration against the Municipal Chief Executive (MCE) for Mfantseman and the contractor who left open drains that led to the drowning of a two-year-old boy.

According to them, they are venting their spleen to get the MCE to put pressure on the contractor to speed up work to prevent needless deaths.
Fuming with rage they gave the MCE, Kenneth Kelly Essuman, two weeks ultimatum to compensate the family of the boy and also tell them something about the open drains.

They also threatened to destroy the drains if the MCE fails to attend to them within the next two weeks.

The two-year-old child drowned in a gutter full of water while playing at the back of his house while his 19-year-old mother was also washing. After a while, the mother realised that her child was nowhere to be found so they started searching around the house but didn’t see him.

The grandfather of the boy, Akwasi Peter, told Kasapa FM that they later found the stick the boy was playing with in the water-filled gutter behind their house.

Acting on that clue, they started searching the gutter only to find the innocent boy dead in the gutter.

The child has been buried and the police have commenced investigations into the case.

Meanwhile, the Assembly Member for the area, Cephas Authur, advised parents to take good care of their children.

He cautioned teenagers to desist from engaging in sexual activities in order to prevent teenage pregnancy.