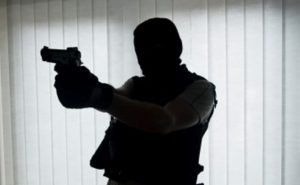 A young lady has been shot dead at Maxima junction in Kumasi.

Witnesses say two suspected armed men on a motorbike opened fire at her and made away with her mobile phone at about 9.30 pm yesterday.

She was found in a pool of blood bleeding from injuries in the chest.

Nana Agyenim Boateng, who rushed the victim to the KNUST Hospital, said the lady was pronounced dead upon arrival.

“I was buying my fruit when I heard a sudden gunshot, so I rushed to the scene. Since the lady was bleeding I moved my car to bring her to the hospital.

“According to the doctors, she had passed on [by the time we arrived]. It’s so sad that a young lady has been shot and her mobile phone taken from her,” the witness said.

He called on the security services to be “up and doing,” noting “the security situation is becoming worrying in the city of Kumasi.”