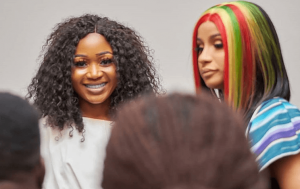 Rosemond Brown’s ‘spiritual twin sister’ Cardi B has reacted to the news of her getting convicted over taking a picture with her son whilst she wore no clothes.

Akuapem Poloo, as she is affectionately called, was sentenced to 90 days in prison for the act which generated a lot of buzz on social media when it first surfaced.

Speaking about the issue, Cardi B said the punishment was quite harsh for such an act which she sees on a regular basis from different parts of the world.

Cardi B added that if there was supposed to be any form of punishment at all, Akuapem Poloo could have been tasked to perform community service or given a social media probation.

According to the rapper, Akuapem Poloo’s picture was not depicting sexuality in any form but rather the natural bond between a mother and her child, which is alright.

Cardi B aired her views on the issue after she was tagged in a Twitter post by Afromusik, seeking her opinion on the trending issue in Ghana.

I seen a lot of Americans do photoshoots like that .Even tho is not my style I don’t think she was going for sexual more going the natural idea.I think jail is a bit harsh .Maybe social media probation or community service. https://t.co/ncdwvggvFK