The Chief Justice has asked Member of Parliament for Asawase, Muntaka Mubarak to assist in investigations into bribery allegations against a Supreme Court Judge.

On Sunday, the Chief Whip of the NDC Caucus in Parliament alleged that a Supreme Court Judge tried to bribe NDC MPs to vote in favour of Prof. Mike Oquaye as Speaker. In a press release on Wednesday signed by Justice Cynthia Pamela Addo, the Judiciary “noted with grave concern the remarks of Mohammed-Mubarak Muntaka…which have been widely published in the media, alleging that a Justice of the Supreme Court attempted to bribe an NDC female Member of Parliament…”.

This allegation is seen by the Judiciary as “a matter of grave import to the integrity of the judiciary”.

“The Hon Chief Justice is therefore taking steps to solicit the assistance of Mohammed Muntaka Mubarak, MP to establish the facts in order that the matter can be dealt with appropriately.”

Below is the full statement; 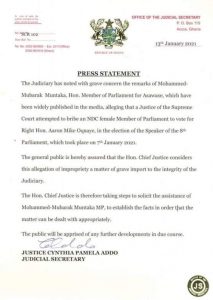