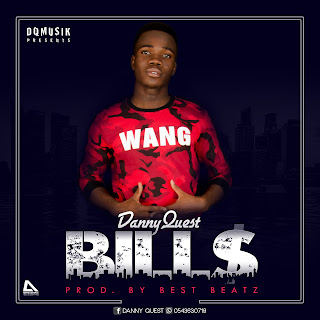 Your favorite sensational singer *Danny Quest* of *DQ Musik* has  again release a single which  is his second single of the year, after the release of his hit Single *VALRNTINA* which featured the lyrical messiah Ras Wormz. With *VALENTINA* still hitting on the airwaves, the youngster has decided to come through again with his heart touching, and sweet melodious voice on a love tune he titled *BILLS*.

The surprise element of this fresh tune is that, the singer decided this time round to throw in some catchy punchlines and great rhymes in a rap verse along with his singing, which will definitely make the song an instant favourite.
Just Hit the Download button to get *BILLS*
AND PLEASE GUYS HELP LETS SPREAD THE NEWS
Danny Quest – Bills. (Prod. by BestBeats) [Download]