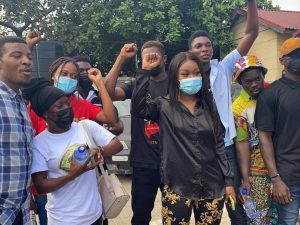 Some 15 of the members of the fix the country movement including socialite Efia Odo who were arrested for massing up at the entrance of the Law Court Complex have been released.

The reason behind the arrest was not known.

The protesters were at the High Court to support lawyers of the group in a suit that has been brought against them.

EIB Network’s Court reports that before the arrest, the protestors were seen taking pictures with Efia Odo who is one of the conveners.

Meanwhile, the Criminal Division of the Accra High Court presided over by Justice Ruby Aryeetey has ruled that the application restraining the #FixtheCountry protesters was moot.

The court said the application before the court was premised on the letter for the respondents not to demonstrate on May 9 and such date has long passed.

To this end, the application was struck out by the court as “moot’

But, the court said, in the event that the conveners want to demonstrate, they “have to go through the law anytime they want to embark on a demonstration.”