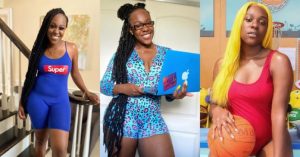 Princess AP, the sister of Ghanaian actress Andrea Owusu, famed as Efia Odo, has been spotted in new photos that have got most of her fans gushing and fantasizing over them.

In the new photos of the actress’ sister seen on her official social media handle, she was seen wearing what looked like a long-sleeved sweater over a pair of jeans. The actress’ sister struck a number of poses as she gets herself captured by the camera looking very pretty. The dancer, model and entertainer appeared all-made up as she dazzles her fans in the photos.

After posting the rather beautiful photos of herself, Princess AP captioned them: “Not for the games so what you tryna Connect Four.”

Many fans and followers of the Princess, who have come to love her for her funny skits, took to the comment section to heap praises on her.