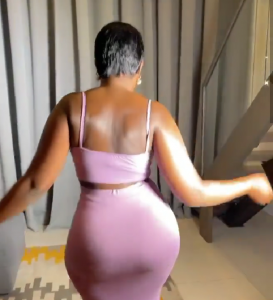 Celebrity wife, Fella Makafui, has proved she is all shades of happiness as she takes to social media to twerk.

She posted a minute-long video on her Instagram platform, which captured her shaking her backside to the pleasure of her fans.

She was rocking a two-piece purple dress, which exposed her curvaceous thighs, giving her enough space and flexibility to dance to Busiswa Gqulu and Naira Marley’s exotic Coming song.

She was describing the sexual content of the song with her gestures, before bending to ferociously deliver her hot twerk.

An unidentified man could be heard in the background hyping her up.

The video has attracted negativity from some fans who encouraged her to act as the married woman she is.

In response, her husband of one year, Medikal, replied critics with two emojis to suggest that their union still bounds and he is very much in love with her as well as her savagery.