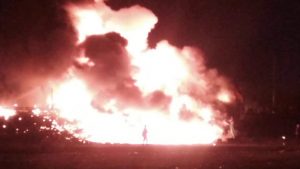 A six-bedroom house and a drinking spot at Obuasi Tutuka were destroyed when blazing fire swept through them.

Speaking to Adom News’ correspondent, Isaac K. Normanyo, some tenants said they were in the compound only to hear a loud boom. They said before they knew, the entire house was on fire including an adjoining drinking bar.

It took personnel of the National Fire Service over two hours to quench the fire when they arrived almost immediately they were called to the scene.

Gado Tahiru, said it was unclear how the fire started, adding that was the second time fire had gutted the same block.

The building, he said, had not been renovated after about 40 years since it was erected.