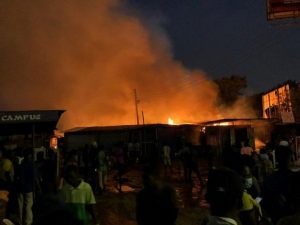 The operations of a Mim-based radio station, Rejoice FM, was stopped abruptly after fire was spotted in the building.

Witnesses say the fire started Thursday morning at about 8:am, minutes after the station ended an interview.

A morning show host and General Manager, Emmanuel Adu sarfo, reportedly saw the fire while working in the studio.

The panicked presenter announced the fire outbreak to listeners and tasked them to inform the police and fire service.

The fire intensified shortly after he was rescued.

No casualty was recorded but property worth thousands of cedis have been destroyed.

The cause of the fire is yet to be established as the Goaso Fire Command commences investigations.