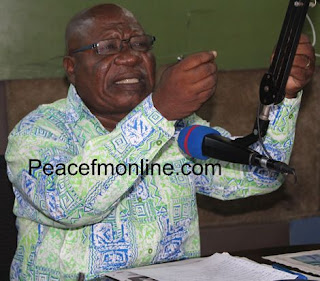 Allotey Jacobs says the Inspector General of Police, David Asante-Apeatu, shouldn’t be sacked over the current state of insecurity the nation is grappling with.

The NDC Central Regional Chairman, in his defence for the IGP, stated emphatically that Mr. Asante-Apeatu is competent and so his critics calling on President Akufo-Addo to relieve him of his postion, should rather be offering solutions to remedy the situation.

“People have been condemning saying they should sack Asante-Apeatu. No! He is a competent Police Officer”, he said.

To Allotey Jacobs, there are several challenges with the Police administration that have to be dealt with and not the dismissal of the IGP.

He recounted some resolutions as retooling and resourcing the Police personnel to combat crimes in the country.

According to him, the Police personnel are in danger due to the lack of adequate sophisticated equipping of themselves to clamp down on the criminals in the country.

He averred that the time has come for the Police administration to strategize, upgrade their knowledge base and intelligence gathering and find new ways because the world has advanced and so, they cannot be using primitive measures to curb the situation.

He noted that one of the ways that the Police could adopt to check the influx of criminals and the corresponding attacks is to liaise with the Nigerian community in Ghana as well as the Nigerian government to gain data on Nigerian migrants in the country.

He also advised the Police hierarchy to have a joint force with the Military and work in tandem to enhance the nation’s security.

Allotey asked Ghanaians to support the IGP to fight any form of crime in the country, particularly armed robbery.

He was commenting on Sunday’s incident at the Kwabenya District Police Headquarters where a Police Officer was gunned down by suspected armed robbers who went to the station to free their colleagues in the Police cell.