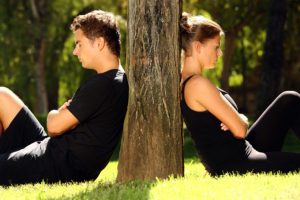 I got married very early. I was only 23 when I walked the aisle with my husband. When I was younger than 23, I saw my sisters going through heartbreaks after heartbreaks so I told myself: “I want the first man I meet to be the last man in my life. I can’t go through all these pains my sisters are going through.” And it indeed happened for me as I wished. I met my husband when I was only 19 years. He was 29 years and had already carved a path for himself in his career. I knew he was the one right from the start.

Everything was perfect for us. We never had a fight or an argument. Whenever I lost my way, his maturity shined through for me so I could find my way home. I thought living with him will change a lot of things for me to see who he truly is. You know what they say: “People change after marriage. It’s only when you begin to live with them that you see them for who they really are.” Our first year as a couple was eventless. The second-year happened the same way as the first happened. I asked: “They say every marriage has some troubles. If that’s true then what’s my share of the troubles?“

I went back to school to get a degree and in our first year, we were placed in groups. There was this man in my group called James. We normally called him Honorable because of the kind of cars he drove. He was in his early forties and came to class each weekend with a different car. He had no time to do anything. He comes to class at 12:pm and the next 20 minutes or so he would leave. At some point, I asked him: “You have everything except time so what are you doing in a school that’s supposed to take us to where you already are?” He laughed and said: “Money isn’t everything.”

We became friends. When he wouldn’t come to school, he would call me and tell me to take notes for him. When there’s an assignment and he wasn’t there, I will do it and submit it on his behalf. He was always grateful and in return, started showering me with gifts. I started thinking of him, not in a way that suggested that I wanted to be with him. I thought of him and thought of the good things he was doing for me. School vacated and for two weeks I didn’t see him. I started missing him. I called his phone one day and he said: “I’ve been missing you.” I said, “I miss you too. A lot.” And then he said: Hhmmm.” I asked: “It’s everything alright?” He asked: “Why did you marry so early?” I said: “I thought I’ve answered that already?”

We became two adults who liked each other but couldn’t say it because of our situation. Everything he did clearly showed he was deeply into me. I was careful. I didn’t want to give anything away but no matter how hard I tried, it showed. It showed in the way I spoke to him. It showed in the way I cared for him. It became palpable when the two of us were together. One day after lectures, he brought me home in his car. I told him, “Please wait let me introduce you to my husband.” He objected. I insisted. We went inside and I introduced him to my husband. The two of them talked as if they knew each other already. He said: “Your wife…she’s a good person. If I didn’t meet her, I don’t think I would be able to complete this course.” My husband asked: “You’ve been copying her work errn?” He answered: “Copy? She does the whole thing for me.” The two gentlemen burst out laughing while I stood there saying in my head: “How could you two be so awesome to me at the same time?”

I thought introducing James to my husband would help curb the feeling I had for him. No, it didn’t. If anything, it rather intensified it. Now I could talk to my husband about him without any fear. My husband could call and asked why I hadn’t come home after school and I could proudly say: “James doesn’t understand what a lecture taught today so I’m taking him through it.” He had no problem with it as far as it was James. One day in his car, he tried to kiss me. I stayed stiff as he drew closer. When he realised I wasn’t drawing closer, he retreated and said, “Sorry, I’m getting overwhelmed.” I said, “Don’t worry, it’s normal.”

When I got out of his car, I slap my cheeks: “Why didn’t you kiss back, silly girl.”

I was scared. I didn’t want to start a fire I couldn’t quench. Each day the feeling grew stronger. I could sleep next to my husband and imagined it was James I was sleeping with. When we got intimate, it was the face of James I imagined. When my husband stood naked in front of me, I asked: “How would it feel like to have James stand in front of me like this? My feelings and thoughts got messed up. My husband had been nothing but an amazing husband. Sometimes I pushed him to the limit just so he could give me a reason to cheat on him but that man has no anger in him. He would say: “I can see your demons are coming up. Take them elsewhere. Don’t bring them on me.” What could I ever do to get him angry so he’ll talk back at me or say something silly so I could use that as a reason to kiss James?

I thought I had to stay away from James so I don’t mess things up. I tried. I refused his calls. I refused to go with him after lectures. One day he didn’t come to school. We did a test and I refused to do one in his name. When he was in school and requested we go for lunch together, I told him I’d already eaten. Anything. Just anything at all to stay away from him. He saw the trick and only laughed at me. He said: “You’re trying so hard but the two of us are adults, why don’t we talk about it?”

That day we talked and agreed on some barriers. “You won’t try to kiss me again and you won’t take me home again when we close from lectures. Going forward, the two of us won’t be alone in any place or whatsoever. You won’t call me unless it’s a life and death issue. No more lunch together.” We said a whole lot of things but the barrier we sort to create soon caved in on us. We broke all the rules and pushed ourselves to the edge. One day in his car, he tried to kiss me and I responded. It lasted for only some seconds. I went home that day and couldn’t look at my husband in the eyes.

I was drowned in my own guilt. For days I avoided him. Somehow, I felt if he kissed me, he’ll notice I’d kissed someone else. Strangely, it was just about that time I developed some strength to avoid James too. I sent him a message one morning telling him: “What happened the other day was an accident. It’s something we shouldn’t have allowed but whatever it is, it won’t happen again and I mean it.” I guess he was also tired of me or the message I sent robbed him the wrong way. He responded: “If you want to be cold, be. If you want to be hot, just be. Stop alternating between the two and be firm.”

We started avoiding each other until finally, we completed school.

On our graduation day, he sent me a message: “Congratulations.” I read it and smiled. I didn’t send one back. I knew if I did, it would trigger a conversation that would lead us into the corner of our emotions. It’s been two years already since we left school. Whenever I think of him, I went into my messages and read his last message to me; “Congratulations.” I would then say to myself, “Congratulations young girl for being able to stand your ground to the end. If you gave in to the demands of your heart at that moment, you might have lost a good thing now and that would have haunted you for the rest of your life.”