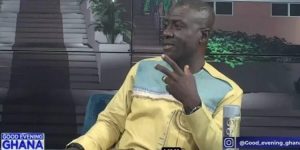 Popular radio presenter Captain Smart says he is unperturbed about what is going on around him, insisting he cannot be cowed into silence.

“Any day, any time, if there is any nonsense going on in this country, I will rise and talk,” he declared.

“I will keep shouting, I will keep pointing the mistakes. If you are a politician, it is your responsibility to either like me or hate me because you don’t feed me and until we begin to do that, we can never ever save this country,” he insisted.

He was speaking on Good Evening Ghana on Metro TV on Thursday, May 6 following the controversy surrounding his apparent suspension from Angel Broadcasting Network (ABN).

The Director of Operations of ABN said he was asked to stop presenting his show mid-way on Thursday morning after a call from owner Dr Kwaku Oteng.

They claimed, as he narrated, that he was being too hard on the government to the extent of using unprintable words for President Nana Addo Dankwa Akufo-Addo, Vice President Alhai Dr Mahamudu Bawumia and Trade and Industry Minister Alan Kyerematen.

Again, he said the management had complained of calls from certain quarters including the Ghana Revenue Authority (GRA) to Dr Oteng over comments attributed to him on Angel FM’s morning show.

He, however, served notice that he will be extremely happy in the next 30 days he has been asked to stay off work.

He stressed: “I am not afraid, I am not worried, I am not perturbed, I am not disturbed, I am a happy man. I am enjoying [with] my family and the 30 days they say I should stay home, thank God I will be happiest person.”

His suspension is seen as an affront to media freedom in the country, fuelling perceptions of culture of silence.

A few notable personalities took to social media to express worry about the issue.

1. Had a worrying conversation moments ago. Captain Smart's boss has allegedly asked him to go off air for a while as a result of undue pressure that has been piled on him by 'high ranking officials in government'.

The General Manager of Angel FM, Kwadwo Dickson, confirms the suspension of Captain Smart and says the reason for his suspension is that he has "spoken against government officials such as President Akufo-Addo, Vice-President Dr. Bawumia, Allan Kyeremateng and the IGP." pic.twitter.com/LHJLNxxm6X