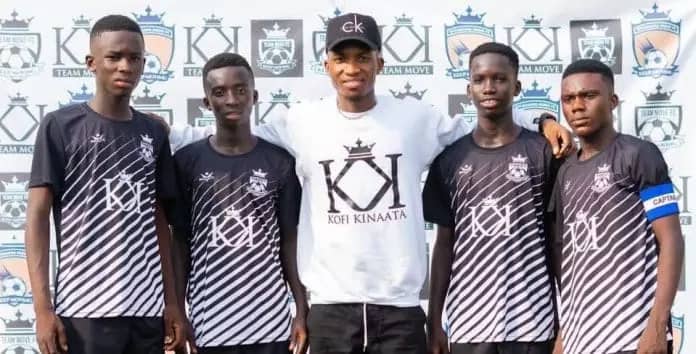 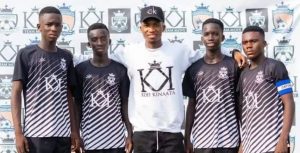 Award-winning Ghanaian musician Kofi Kinaata’s love for the people of Effiakuma – a community in the Western Region – is nothing but captivating.

Before doing full-time music, Kinaata was a footballer. Though he didn’t play to the highest level, he was good defender as one of his playmates testified.

“He was a very good player, a tough and rigid defender,” Yahaya Seidu one of Kinaata’s playing mate said.

After having his breakthrough in music, Kofi Kinaata has found a way of investing back into the beautiful game by setting up a football team in Effiakuma.

“Myself, I have been once a footballer. I used to play and growing up around this place, when we say entertainment, it is football. We had a lot of pitches so football was what we were doing. I’m a very passionate footballer and now a football fan,” he said. Named after his fanbase, Team Move FC comprises of U-12, U-13, U-15, and a third Division side.

Kinaata explains the initial plan for setting up the football club was to give hope to players from Effiakuma after helping some of them with basic football equipments in time past.

“But I think it is now different, the people have accepted it because Effiakuma and Western Region support their own,” says Kinaata.

The two-time song writer of the year is not diverting from music after setting up the football club. Chunk of his attention is still on his music career.

“I have people taking care of it for me; I’m not doing it alone. So I wouldn’t say I’m doing full-time football or part-time football; what I’m giving here is not even up to a part-time. The focus is on the music and I’m doing just the finance and some few things.”

Team move FC has over hundred players in all which comes with financial burden.

But for Kinaata, he gets support from the likes of Abdul Haye Yartey who is the owner of Cheetah FC and others.

He was born in Effiakuma, grew up there, and is a mentor to most of the young kids in the Western Region and Ghana at large.

After winning the heart of many with his deep lyrics, Kofi Kinaata is providing hope for over hundred youths in Effiakuma through football.