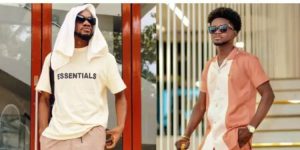 Mr Drew rubbished claims that he has stolen Kuami Eugene’s song. He insinuated Kuami Eugene as a blatherskite who shouldn’t be taken seriously.

During the interview, Delay asked Mr Drew if he writes the songs he performs. To which the musician replied in the affirmative. Riding on the subject, the host asked about allegations that Kuami Eugene has levelled against him for supposedly stealing his song. In response, he said, “Oh, Kuami Eugene? Forget that guy. Everyone knows he talks anyhow. He knows this himself.”

He further explained that Kuami Eugene and his label Management made indicting comments to suggest that the song belonged to him. The comment went like this; This is a copy of No Dulling by Kuami Eugene.
When asked if he was sure Kuami Eugene was behind that account, he replied in the affirmative. He said an artist cannot be in the dark about the activities of his label o his behalf. He also pointed out that his colleague commented right after the incriminating comment by his label.