A lady, who caused a stir on Sunday, February 14, after her boyfriend proposed to her in Benin City in Nigeria has broken her silence.

According to the lady identified as Grace Odudu, the video was just a skit she shot with her friends. An excited crowd had gathered when the said boyfriend went on one knee to propose to the lady only for them to witness something quite shocking.

Onlookers initially presumed she may have lost her senses out of shook from what was unfolding before her eyes but the shouts degenerated much to their surprise. The video which went viral on social media garnered mixed reactions as many bemoaned how she could run ‘mad’ on such a big day.

Grace took to her Instagram to repost the videos, adding it was just a prank, saying she actually did not go mad.

Other friends have also commented to affirm her claims that it was just a skit though many fell for it.

Read the posts below: 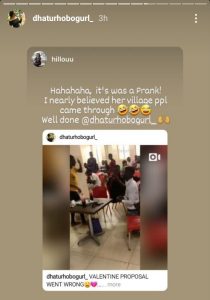 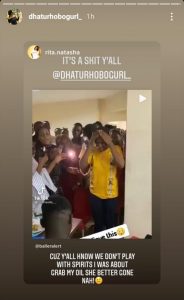 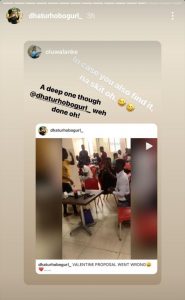