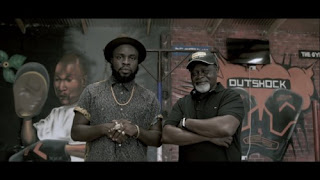 Ghanaian rap artiste, M.anifest has featured boxing legend Azumah Nelson in the video of a song he released few months ago.

He released the video on 19th July 2018 (which was Azumah’s birthday) to celebrate him on his 60th birthday.
The song titled ‘Azumah Nelson Flow’ sees the MC strike a defiant tone on the drum and horn-heavy thumper produced by Radical the Kid.
Among M.anifest’s musings are placing popularity above quality and prioritizing awards over artistes’ welfare.
M.anifest is well known for producing songs with thought-provoking lyrics.
Watch the video below: