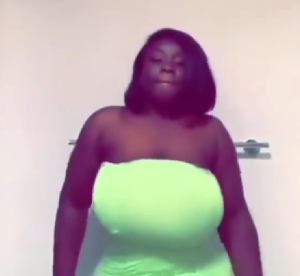 She once again stunned social media users with her heavy boobs which she said is a hereditary trait that runs in her maternal lineage.

The texture of the dress gave way to her nipple as she was braless.

Fans, who have been left in awe, have expressed mixed reactions.

A post shared by F.A.M.E (For All Made Equal) (@gh_gossip_corner)