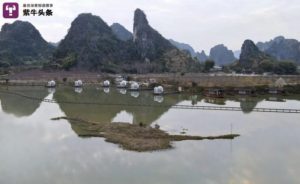 A Chinese man, who spent a small fortune as well as a lot of time and effort turning a small wasteland into a pink paradise in order to impress his ex-girlfriend, has received a clot of compassion online, after failing to win back his old fling.

It’s fair to say that Xiao Xu, a young man from Hetou Village, in China’s Guangdong province, went above and beyond to win back the heart of his ex-girlfriend.

Over the course of a month, he spent around 100,000 yuan ($15,500) to turn a small patch of wasteland rising up from a lake near his village into a fairytale Love Island complete with fake cherry blossom trees, swings, river rock arrangements, and more.

He even convinced some locals to give him a hand and turn this place into the ultimate love letter to his former partner. Unfortunately, things didn’t turn out the way he had hoped.

The 30-year-old Xiao Xu met his ex-girlfriend while working in the city of Guangzhou, and the two were together since 2018 until last year, when he decided to return to Hetou Village, to take care of his elderly parents.

Unfortunately, his girlfriend, who was born and raised in Guangzhou, didn’t want to give up the city life, and her family didn’t approve of her living in the countryside either. So they broke up.

But that wasn’t the end, as far as Xiao was concerned, and to show his former partner that he still loved her, he devised a plan to put his feelings for her on full display. On December 20, last year, he started work on turning an ugly wasteland rising up from the lake near his home into a unique symbol of his love.

The man spared no expense in his quest to impress his old fling. He planted dozens of fake peach and cherry blossom trees and plastic pink daisies, paved alleys with rocks, set up romantic swings and even enlisted locals’ help in building arched wooden bridges to this pink paradise.

Building the unique place everyone started referring to as Love Island took over a month, and reportedly cost Xiao Xu about 100,000 yuan. After finishing work on the project, the hopeless romantic sent photos of it to his ex-girlfriend, confessing that he had done it all for her. Although impressed, the woman didn’t respond the way he had hoped.

“Thank you for your sincere dedication! You will find something better than me,” Xiao’s ex wrote him back, which must have been devastating.

The story of this unusual display of affection may have gone unnoticed by the world had Xiao decided to tear down his Love Island. But he didn’t, and as locals and visitors to the village started taking photos of it and sharing them on social media, romantics from far and wide started visiting to see it first-hand.

Over the last couple of months, Xiao’s pink island has hosted countless photo ops, as well as several wedding ceremonies, and it has become a symbol of love. Even though it failed in its original mission, the Love Island has fulfilled its purpose of sending a message of love, and its creator is at least happy about that.

“The Love Island did not fulfill itself, but it fulfilled others and witnessed the love of others, which is also a good thing,” Xiao Xu told Purple Bull News.

Xu Jingfeng, deputy secretary of Hetou Village told the same news outlet that the overwhelming success of Love Island has inspired local authorities to start promoting it on the internet in the hopes of boosting tourism even more.