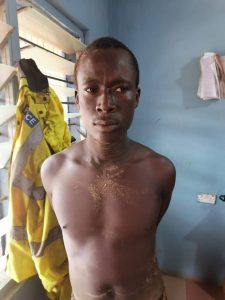 A well-known thief and alleged rapist, Kwabena Acquah, is in the custody of the Juaboso Police Command for sexually assaulting two siblings and another unrelated crime.

Suspect Acquah, back in March 27, 2021, was accused of assaulting the sisters, and raping one at knife-point at Sefwi Boinzan. He also fled with their two mobile phones and GHS 100.00. 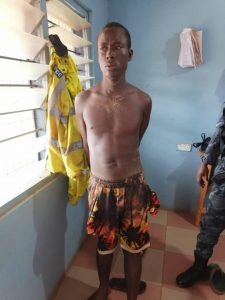 In an interview moments after the crime, the elder sister narrated that “he ordered us to bow down and tied both our hands behind us and proceeded to undress me. After realizing I was in my menses, he moved to my younger sister and took advantage of her.”

However, two months after he took cover in a hideout, suspect Acquah is said to have gone on a robbery mission in the same community where he was apprehended. He is said to have snatched mobile phones and money, but luck run out on his side when one victim overpowered him. 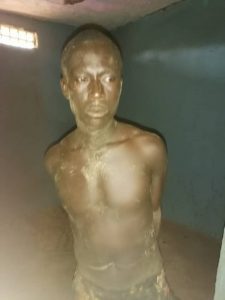 He was beaten before being handed over to the police.

He was identified by the Sefwi Boinzan police command and referred to the Juaboso police station.