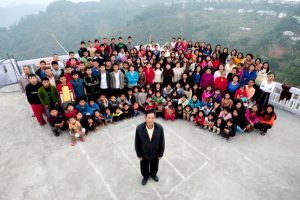 A 76-year-old man, believed to be the head of the world’s largest family, has died in India’s Mizoram state.

Ziona Chana, the head of a religious sect that practised polygamy, died on Sunday, leaving behind 38 wives, 89 children and 36 grandchildren.

The news was confirmed by Mizoram’s chief minister, Zoramthanga, who offered his condolences on Twitter “with a heavy heart”.

Doctors told PTI news agency that Chana’s condition deteriorated at home in his village, Baktawng Tlangnuam. He was admitted to the hospital on Sunday evening, where he was declared dead on arrival.

It’s hard to say if Chana was indeed the head of the world’s largest family since there are others who claim the title.

It’s also hard to estimate the exact size of Chana’s family. At least one report claims he had 39 wives, 94 children, 33 grandchildren and one great-grandchild, which adds up to 181 people.

While various local news reports have referred to him as holding the “world record” for such a large family, it’s unclear which global record it is. It has also been widely reported that the family has been featured twice on the popular TV show Ripley’s Believe it or Not.

But world record or not, Chana and his family are a local sensation of sorts, attracting tourists to their village in India’s northeast.

And Chana’s extraordinary life has grabbed several headlines over the years.

The enormous family lives together in a four-storied house called “Chuuar Than Run” or New Generation House, with 100 rooms. His wives share a dormitory near Chana’s private bedroom, according to local media.

The mansion is a major tourist attraction in the state, with people from around the world thronging the village to get a peek into the family’s lifestyle.

According to Reuters news agency, Chana was born in 1945. He met his oldest wife, who is three years older than him, when he was 17.