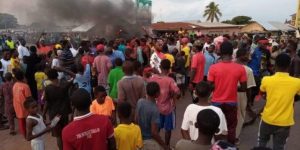 An Auntie of one of the victims who were shot at Ejura, Rita Sefa Amponsah, is saddened about her nephew’s predicament.

According to her, Louis Ayikpe, who sustained gunshot wounds on his stomach, was not part of the protest.

She said he was urinating into a gutter when he was hit by the stray bullet being shot into the protesting crowd.

“He was urinating when the bullet caught him unaware,” she said.

Madam Amponsah said it’s difficult to accept what happened, adding that her nephew has not been able to eat since he was sent to the Komfo Anokye Teaching Hospital.

“He has not eaten since. It is only today that the doctor asks us to give him water,” she said.

Meanwhile, Member of Parliament for the area, Mohammed Bawa Braimah, has visited the victims and made a donation to both families to support them in these trying times.