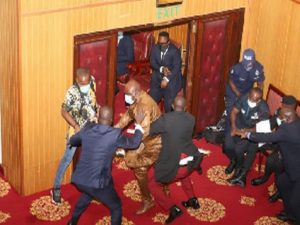 The Member of Parliament (MP) for the Tema West constituency, Carlos Ahenkorah says he does not intend to take revenge on Asawase MP, Mohammed-Muntaka Mubarak.

Muntaka gave Carlos some beatings after he snatched ballot papers during the inauguration of the 8th Parliament. Reports are rife that the Tema West MP who has been one of the main subjects of discussion after that ‘chaotic election’ in Parliament, will retaliate and pay Muntaka back in equal measure.

But speaking in an interview on Neat FM, he debunked those reports saying “I forgive Muntaka”