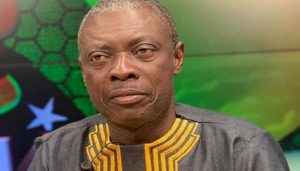 Reverend Christian Kwabena Andrews, popularly called Osofo Kyiri Abosom, has advised Nana Agradaa to first call the victims of her scams and reconcile with them.

“If she has the telephone numbers of those she has allegedly duped, the best thing for her now is to call them.
“Those she has to settle either in monetary terms [or whatever way], she must do that as that will also make her court issues in a way less burdensome,” Kyiri Abosom said on Kasapa FM.

The born-again fetish priestess, Patricia Oduro Koranteng, during a press conference after her release from cells, said she had turned a new leaf and was on her way to becoming an evangelist.

She also pledged to lead some powerful men of God to her residence this week for all her gods to be burnt.
“I told God he is the Supreme Being. If I am not incarcerated after stepping foot in court that day, I will hail Him. After I threw that challenge to God, I stepped out from the cell,” she narrated.

Osofo Kyiri Abosom has however advised her to take her time and grow into the work of God, saying she should rather have a piecemeal approach to the Kingdom business.

According to him, the converted fetish Priestess cannot instantly give herself the title of an Evangelist now.
“We should thank God, but temptations don’t occur for nothing. Since she has realized that there is a bigger God than what she had, we should thank God for her life,” he reiterated.

“So I can say that perhaps this is the time God has set for her to become a Christian, and if really it’s from her heart, may God grant it as her wish.

“With Christianity, after your confession, the most important thing is that you don’t go back again to your old ways,” he noted.