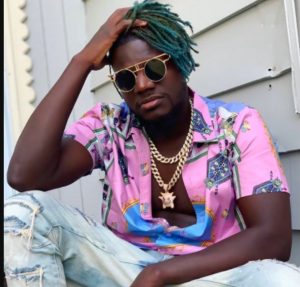 Controversial musician Pope Skinny is in hot waters over some LGBTQ comments he made about the late Ebony Reigns.

Pope Skinny had alleged that Ebony was a victim of an untimely death caused by a Sunyani god over her lesbian acts, a ‘secret’ he said was weighing him down.

However, the comment has been greeted with intense heat from Ebony’s father who has vowed to make Pope Skinny eat back his words.

“What was running through his mind when he made a comment like this at this time. Let’s assume it is the truth, what did you gain from spewing such,” a charged Mr Opoku Kwarteng blurted out in the studios of Kingdom FM.

Ghanaians have attributed the comment to Pope Skinny’s insatiable desire for trends, but Starboy Kwarteng has sworn not to let him off the hook this time.

He described Pope’s conduct as a shame for a mid adult like Pope Skinny to ride on his late daughter for controversy, reminding him to be wary of when he will also breath his last.

“Which god will kill her [Ebony] because she is a lesbian… Who knows; Ebony didn’t know she will die this early. You can’t be too sure so when you are spewing things of a sort, you should be mindful. Sometimes, people do things to push you to the wall, and now I’m pushed”.

Mr Kwarteng has threatened to take legal actions against the musician to provide evidence for his claims, lest he faces the music.