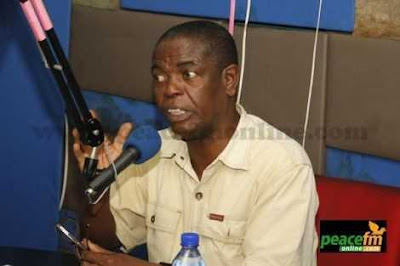 Managing Editor of the Insight newspaper, Kwesi Pratt Jnr has shared his experience during the media encounter with President Nana Addo Dankwa Akufo-Addo.

The President had an encounter with the media at the Flagstaff House Wednesday. After the encounter, some journalists bemoaned the fact that they didn’t get the chance to ask their questions.

Contributing to a panel discussion on Radio Gold’s Alhaji and Alhaji, Kwesi Pratt narrated how he got the opportunity to ‘finally’ ask a question during the event.

“When the door was opened for people to ask questions, I was the first person to put up my hand; it is possible that the minister did not see me…anytime I put up my hand so forcefully, the minister came and said this is the time we want gender balance so it has to be a woman and of cause not being a woman I didn’t have the chance and then he will come up and say no we’ve had a one or two newspapers so let’s have radio, because I wasn’t with radio, I didn’t have the chance and so on and I was getting deeply frustrated and I am not saying this to mean the minister was deliberately avoiding me; it may well be that he genuinely wanted to achieve that balance…it went on and on until the President made an intervention which led to my being given the microphone; that for me may have indicated that the President was willing to listen to everybody…” he narrated.