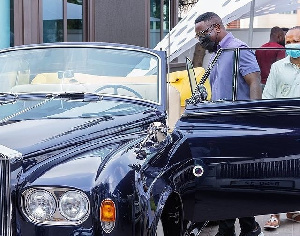 Sarkodie standing close to one of the cars

Multiple award-winning rapper Sarkodie has been energised by the achievements of Dr. Osei Kwame Despite after touring the business mogul’s garage and witnessing a number of posh cars.
The rapper who surprised the Despite Group of Companies boss on the latter’s 59th birthday was given a tour of the garage. Among the fleet of cars were Mercedes-AMG G63, Mercedes Benz Brabus, Mclaren P1, and Mercedes 540K.

Last year, the wedding ceremony of Tracy Akosua Gyamfua Ameyaw and Kennedy Osei Asante, the first son of Osei Kwame Despite, went down in the history of Ghana as the biggest, most colourful in 2020. Held at Trassaco Valley, the wedding saw the family flaunt their valuables including vintage cars.

He has received numerous prestigious awards including an Honorary Doctorate Degree in Human Resource from Canterbury University, Honorary Ambassador of Business Entrepreneur in West Africa (Ambassador) and Honorary Man of the Moment, Ghana, West Africa.

Watch the video below;