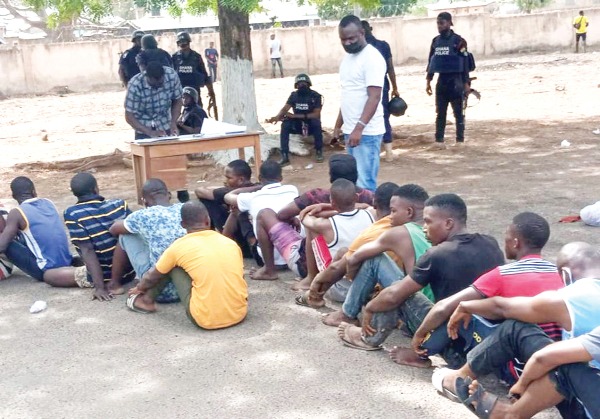 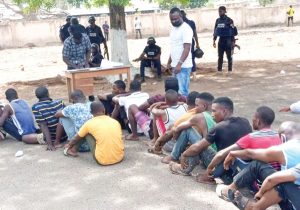 The security agencies, led by the Ghana Police Service, last Sunday rounded up about 500 foreigners in a dawn swoop at various locations in the Bolgatanga municipality in the Upper East Region.

Preliminary investigations showed that 18 of the foreigners were Burkinabes, while the rest were Nigerians.

The two-hour swoop was led by personnel from the Upper East Regional Police Command, with support from the Ghana Immigration Service (GIS), the Ghana Armed Forces (GAF) and the National Intelligence Bureau (NIB).

The Public Affairs Officer of the Upper East Regional Police Command, Assistant Superintendent of Police (ASP) Mr David Fianko-Okyere, who made this known to the Daily Graphic in Bolgatanga last Sunday evening, said the foreigners were being taken through further levels of screening to ascertain the veracity of their claims to various nationalities.

ASP Fianko-Okyere further explained that during interrogation, some of the suspects had said they were working at some places they claimed as their offices or place of work, while those who were arrested in homes said those places were their permanent places of residence.

He indicated that the police would conduct further investigations to find out those who were residing in the country legally and illegally, saying those found to be illegal residents would be handed over to the GIS for possible repatriation to their respective countries.

The Public Affairs Officer observed that although Ghana’s borders remained closed as part of the coronavirus disease (COVID-19) restrictions, investigations showed that some people were likely to be using unapproved routes to get into the region, and for that matter the country.

He stressed that the approved routes were being manned effectively by the security agencies and so it was unlikely that people would use those routes to get into the country.

He advised residents of the region to do background checks on foreigners who wanted to rent their houses or apartments by liaising with the police.

ASP Fianko-Okyere advised residents of the region not to harbour criminals or people with suspicious backgrounds, as those residents would not be spared if found out.

He stressed that the Regional Police Command had begun an operation to weed out criminals and curb crime in the region and would carry out unannounced swoops as part of the operation.

“Let me remind residents that our robust operational strategy is still in force and so you will continue to see snap checkpoints, 24-hour patrol by uniformed men and plainclothes intelligence-gathering personnel in the streets and everywhere in the Upper East Region,” he stressed.

Last week, the Regional Police Command began an exercise as part of efforts to curb the increasing rate of crime in the region, which was also getting violent.

The crimes include armed robbery at particularly mobile money vendors and the snatching of motorbikes at gunpoint.

Records at the command show that perpetrators of about 75 per cent of violent crimes, particularly robbery, used unregistered motorbikes to commit those crimes.

In last week’s operation, 107 unregistered motorbikes were impounded, out of which only nine owners have presented their genuine documents and their motorbikes subsequently released to them.

Also, the GIS has cautioned Ghanaians living in communities along the country’s land borders to be vigilant and careful about their interactions with foreigners, advising them not to help such people enter the country illegally, as they could be fugitives.

That follows news of a massive jail break in Nigeria where 1,800 people escaped a fortnight ago, a situation that has also seen the GIS trigger high-alert surveillance at the borders.

In a statement to alert and caution both GIS staff at the regional borders and border community members, the GIS said there was the possibility that some 1,800 convicts who escaped from the Owerri Custodial Centre in Nigeria might seek to cross into Ghana to avert recapture.

More than 1,800 prisoners are on the run from southeast Nigeria after they had escaped when heavily armed gunmen attacked their prison, using explosives and rocket-propelled grenades, the authorities said.