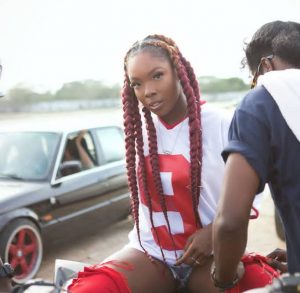 Feli Nuna, Off Da Ground artist, has made a powerful statement.

In a series of tweets, the “Anadwo” hitmaker, who was recently announced as a signed artist to Fuse ODG’s Off Da Ground recording, made some statements about her previous label and unreleased songs.

Feli Nuna revealed in her first tweet that it’s funny how some artists release songs that sound like her demos.

She tweeted; “Funny how artists be releasing music and it sounds like my old demos“.

She went on to reveal that she’s not going after any artist as she’s been to the fact that all she’s saying is the real fact and never a lie.

She tweeted; I’m not capping abt what I said about artist’s new music sounding like my old demos neither am I trying to ‘start anything’. I have always experimented with sound mixing genres etc.. even more in the past but my former label chose to release the ones that sounded more commercial.

Then at some point I admit to also believing that that was the way to have a hit song. Forcing me to create music that sounded more like the ones out there on the radio etc. I wasn’t truly happy.. but I felt that was what I had to do to be a successful artist.

That’s one of the 2 main reasons I took another break off the scene from 2019 – 2021. Cos I had to reassess my vision and get back on track
The thing that I loved doing so much became a difficult chore. It became such a pain. Also because I was an independent artiste at the time

And I had to fund and promote and market my music on my own. I struggled to maintain the standard I set and was used to.

Now I’m in a better place. Grateful for the resources I have now. I’m definitely gonna keep pushing till I’m the one of the biggest from Africa. SGHM 🔥