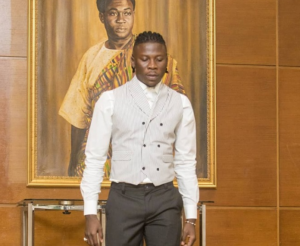 Celebrated Dancehall act, Stonebwoy, assumed the role of a preacher to address the Vodafone Ghana Music Awards (VGMA) Board.

VGMA, in its official statement, said it had lifted the indefinite ban it placed on Stonebwoy and Shatta Wale over a brawl at the scheme’s 20th edition. A portion of the statement read: ” The Board agreed to admit them back to the scheme, hoping that such altercations that bring the scheme into disrepute, do not occur in future events. This makes them eligible to participate in this and subsequent editions of the VGMA, if they desire to do so.”

But, Stonebwoy, breaking his silence almost a week after the publication, has questioned the Board’s decision which was taken without prior communication with the artistes involved.

Recounting knowledge he acquired from Sunday School, Stonebwoy urged the VGMA to dissect issues before arriving at a conclusion.

Stonebwoy linked their sin to that committed in the Garden of Eden by Adam and Eve. However, he stated that unlike the all-seeing God who already knew what transpired, the VGMA Board was not interested in hearing their side of the story.

He is yet to declare his stance on participating in the award scheme.

The right to be heard is a principle that applies in every noble society. Even the all seeing God, who had already seen and knew all that Adam and Eve did in the Garden of Eden, still made sure he heard them before he took action against them. #IfTheySoDesire really???