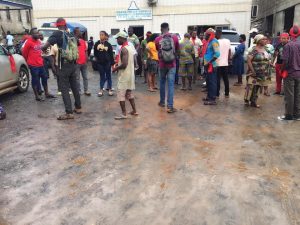 The Gyaasehene of Awudua in Tarkwa Dr Nana Adarkwa Bediako III has allegedly been kidnapped by some unknown assailants, Takoradi-based Empire FM has reported.

He indicated that the driver of the Chief Paapa Kwesi on Wednesday 14th July 2021 around 7 pm called him that he saw the Gyaasehene’s car parked in front of Savings and Loans company Abii National but the chief was nowhere to be found.

“He saw the car of Gyaasehene parked in front of Abii national with his two phones in it, his car key in the ignition but nowhere to be found”.

He added that he quickly went to the residence of the Gyaasehene to confirm but he was not at home. He then went to the Tarkwa police command and brought the Police to where he found the car and subsequently followed up with a formal complaint at the police station.

Nana Kwabena Obo II added that on Sunday, 11th July he had a call from one Kakra, a nephew of the missing Chief, threatening to eliminate him within five days.

“He said he is giving me five days to eliminate the Gyaasehene because he is a threat to his work. He assured me that he will eliminate him, and if that happens he is responsible.”