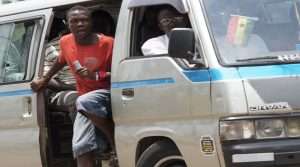 Former Deputy Minister of Transport, Daniel Nii Kwartei Titus-Glover has asked transport operators and those who do not belong to any transport unions not to increase transport fares arbitrarily.

The former Tema East Member of Parliament said some unions and drivers would want to take the opportunity to increase their transport fares due to the increment of fuel prices but that could bring chaos.

The National Petroleum Authority (NPA) on Tuesday rescinded its decision to increase fuel margin to 17 pesewas per litre.

In a communique dated May 4, NPA revealed that the prices of fuel per litre would be reduced by 9 pesewas starting from Wednesday, May 5.

Reacting to the issue on Onua TV’s Maakye on Wednesday hosted by Adwoa Konadu-Yiadom, Titus Glover said “the drivers must not unilaterally increase the fares. When they do that, it will not bring peace. Work through your structure. Work through your unions”.

He added “because those who load on the road side will do what they like and that brings chaos. We will urge them all to stop. They should also join the unions and work through them”.

He recalled that while at the Transport Ministry as a Deputy Minister, “we looked at the factors that led to the increment when I was the deputy. We got our data and we asked the transport operators also to bring their data and if there is the need to increase it, we do that”.

Regrading factors that result in fuel price increment, he explained that “the dollar and cedi have resulted. We are recovering from the covid-19 so such hardships will come but the government has done well”.

Commenting on the impending demonstration to put pressure on the government to fix the country, Mr. Titus-Glover said “it’s their civic responsibility. No one will or can prevent them so far as they follow the procedure”.

He said “but the situation now means we cannot do that on a large level. If the government has put caveat on churches and Muslims, then we should be careful”.

He admitted that “there are few challenges in Ghana but it’s not broken down”.