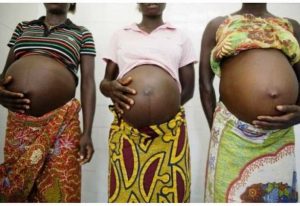 Statistics from the Ghana Health Service (GHS) indicate that the Upper East Region recorded a total of 6,533 cases of teenage pregnancies in 2020.

The figures further showed that the region in the first quarter of this year has so far recorded 1,639 cases.

The Upper East Region is among the areas with the highest incidence of child marriage, teenage pregnancy and more worrying the menace of transactional sex among minors as evidenced by the multiple indicator cluster survey 2018.

Transactional sex relationships are non-commercial, non-marital sexual relationships motivated by the implicit assumption that sex is exchanged for material goods or other benefits.

Speaking on the trend of events, a Non-Governmental Organisation (NGO) based in the region, RISE-Ghana, which focuses on health, environment and governance, identified transactional sex as one of the leading causes of the high spate of teenage pregnancy in the region.

Similarly, the NGO noted that many teenage girls were compelled to sleep with men in their desire to own mobile phones while others were lured with noodles, popularly called Indomie.

The Executive Director of RISE-Ghana, Alhaji Awal Ahmed Kariama, in an interview with the Daily Graphic last Thursday, observed that transactional sex was among the high causative factors of teenage pregnancies among adolescent girls.

He noted with concern that teenagers with access to smart phones with adult content were also fueling the menace of teenage pregnancies in the region.

Touching on how to prevent the situation where adolescent girls are lured into sex with noodles, Alhaji Kariama encouraged parents to add noodles to the local household menu occasionally to satisfy the appetite of the curious young ones.

Alhaji Kariama also enjoined chiefs, families and community leaders to call out perpetrators and stop adjudicating and “settling” criminal cases such as rape and defilement.

He has, therefore, called on the society to act in line with the spirit and letter of the United Nations Convention on the Rights of the Child (UNCRC) and Ghana’s Children’s Act which enjoins all to promote ‘the best interest of the child’ in all matters involving children.

For him, there was the need to intensify sex education and the associated risk of sexually transmitted diseases which tended to increase the burden of care on mothers and soiling of the reputation of parents and families due to the attendant stigma.

He also encouraged parents, particularly mothers, to desist from the practice of getting angry and refusing to talk to their daughters or ignoring them, noting that when parents refused to talk to their children, such situations gave the teenagers the licence to misbehave, which often leads to teenage pregnancy.

RISE-Ghana is one of the NGOs in the country implementing the ENOUGH project, which is aimed at ending sexual and gender-based violence in Ghana, Liberia and Mali.

The ENOUGH project is a three-year [2020-2023] multi-country project funded by the European Union through Oxfam in Ghana and WILDAF Ghana.