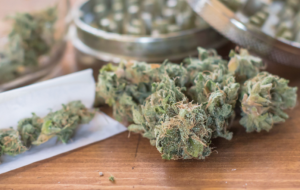 The seizure was done at Carpenter, along the Bamboi-Bole Highway, in the Savannah Region.

The dry leaves, which were parceled with hard paper and concealed in sacks, were loaded in the booth of an O.A. Bus with registration number AS-2914-21. The vehicle was travelling from Accra to Wa.

The Savannah Region Police Public Relations Officer (PRO), Sergeant Agyekum Owusu, who confirmed the seizure to the Ghanaian Times, said upon a tip-off, a highway patrol team of the Police Command inspected the bus and discovered suspected narcotic substances, in the booth of the bus.

Sgt Owusu said investigations revealed that the load was given to the conductor of the bus, William Appiah, by a former conductor of OA Travel and Tour, in Accra.

According to the Police PRO, Appiah and the bus driver, Ernest Owusu, denied knowledge of the content of the parcels concealed in sacks.

“Appiah told us that the sender gave his mobile phone number to the recipient of the load at Wa,” the PRO stated.

Sgt Owusu said the bus upon arrival together with police escort, waited at a fuel filling station at Bamahu, a suburb of Wa, for the owner to come for the parcels as agreed upon with the bus conductor on a phone call.

“The owner as reported by the escort team, was entering the fuel station with a tricycle when he saw the police and immediately jumped off the tricycle and fled on foot”, the police PRO said.

Sgt Owusu said the suspects have been kept in police custody to assist in investigation, and the tricycle with registration number M-17-UW-7699 has been impounded by the police in Wa to help trace the owner.

Meanwhile, a source close to the police, indicated that the sender of the parcel, whose name has been withheld, had been arrested at Kintampo in the Bono East Region.