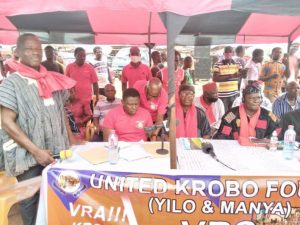 The United Krobo Foundation, a group in the Krobo area has raised concerns, over unresolved issues of overbilling by the Electricity Company of Ghana, despite petitioning the government.

Addressing the media at Agormanya in the Eastern Region, Saturday, the pressure group insisted they will not pay accumulated electricity bills. This follows an ongoing disconnection exercise undertaken by the power distributor in the area.

“This skirmish developed as a result of ECG not being able to read meters for more than a year, thus issued estimated bills, wrong bills, and workers of ECG not being customer-friendly. All efforts made to resolve these peculiar problems were to no avail. The issue at hand was rather complicated and resulted in the death of one person and the injury of several innocent people,” the United Krobo Foundation said.

The pressure group said, a committee set up to investigate the issue and make recommendations corroborated the issues raised against ECG.

“ The Kofi Afeau Committee invited all stakeholders, went deep down into the matter, and established the fact that 99% of what the Krobos said against ECG is a fact. The good people of Krobo land deserve the best and the life and property, not communities must be respected. United Krobo Foundation confirmed that Police Officers who committed barbaric acts have been transferred out of this community and Krobos demand answers,” the statement read.

Public Relations Officer of the Foundation, Nathan Boryor stated that the blatant failure of former Energy Minister, John Peter Amewu, to investigate the grievances has compelled them to demand that, the accumulated bills be declared null and void.

The United Krobo Foundation concluded that, “Krobo State from now onwards, has made it clear that they are no longer customers of ECG.

“We appeal to authorities to remove engineer Ochere from office with immediate effect for peace to prevail in Krobo land, we will never allow the ECG to do their mass disconnection exercise,” he warned.

They want the VRA to take over power supply in the area and give it to them for free as compensation to Krobos for taking the lands of their ancestors for the construction of the hydroelectric dam, which eventually displaced them to their current locations.