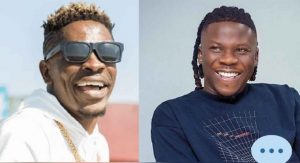 The Stonebwoy and Shatta Wale rivalry has gone far back in the days and has come a long way as Stonebwoy dropped a throwback of himself and Shatta Movement President Shatta Wale in their hustle days a decade ago. The photo from 2010 was from a competition held at the La Pleasure Beach to award the Dancehall King and Queen in Ghana at the time.

Stonebwoy was competing with Shatta Wale who was known as Bandana at the time and other then upcoming artistes whose names have since died out including Commander Messiah, Parton, Scooby Saller and Lingua Kat.

The event was graced by dancehall legend and “My Own” singer Samini Dagaati, Iwan and several other dancehall artistes. The emotional photo confirms the story that nothing good comes easy. You have to work for it. While the names of many of their competitors died out, Stonebwoy and Shatta Wale persisted.

Eiii We tire before before 😅
Ah Well We Still Dey here.. @shattawalegh Don't You Think Gh Gov. For just Call us And Slap us with GHC 2million each 😅 anaa? pic.twitter.com/PXVT7ZflBG