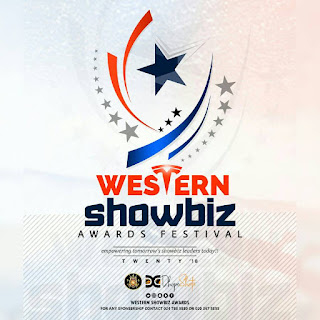 Pipigee promotions Event planning and management consultancy, a Ghanaian and a western region-based event organising company, has launched this year’s sequel edition of the Western Showbiz Awards (W.S.A 2018 FESTIVAL) at the Snnit Hall for in takoradi last Saturday between the hours of 11:00am.

The short and brief launch ceremony which attracted a large number of stakeholders in the Showbiz industry, including musicians living in the western region and beyond.

However, organizers of this Award scheme took the opportunity to open nominations to the general public.

The awards scheme, according to the organisers, is being organised to reward, motivate, empower and restore competitive spirits to all showbiz stakeholders and  personalities in the western region who has contributed immensely towards the showbiz  industry in the western region..

The awards ceremony which has been slated to happen on November 24th will also witness performances from all successful music criteria nominees and other guest artistes.

They added that nomination has been open for free to public patronage forms can be downloaded at the official Facebook handle of yge Award scheme (Western Showbiz Awards).

These Rules and Regulations, Categories and other important Dates relating to this biggest showbiz Awards festival  were However Released to guide Nominees in their fillings.

1. A person or An Act must be a westerner (come from the WESTERN region) to stand a partial chance of becoming a nominee under this Award scheme.

3. A person or An Act can successfully become a nominee under this Award scheme after his/her nominations has pass through the scrutiny board of jury.

4. A person or An Act does “NOT” Automatically become a nominee after filling his/her Nominations.

5. A person or An Act who has No western lineage but operate his/her showbusiness in the western Region has an absolute eligibility to apply or become a nominee after going through the scrutiny board of jury processes.

These evaluation criteria were established to be relevant, comprehensive, well-aligned with the ever-evolving definition of “innovation,” transparent for nominees  and clearly defined for our voting bodies. There are no precise, objective metrics that unambiguously define how companies, individual Acts and concepts is ranked  for each evaluation criteria. We have developed the evaluation criteria and a corresponding set of assessment tools and scales that we believe allow for a  honest and equitable assessment of each entry. All entries will be judged on the following Western Showbiz criteria:

WESTERN MOST POPULAR MUSIC SINGLE OF THE YEAR

INDIGENOUS ARTIST OF THE YEAR

WESTERN MOVIE OF THE YEAR

WESTERN EVENT HOUSE OF THE YEAR

WESTERN BEAUTY QUEEN OF THE YEAR

WESTERN RADIO PROGRAM OF THE YEAR

AUGUST OF EVERY PREVIOUS YEAR TO NOVEMBER OF CURRENT YEAR IN EVERY ANNUAL AWARD SCHEME.