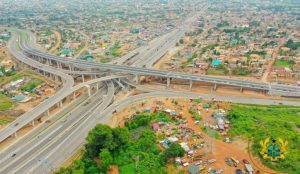 The Municipal Chief Executive (MCE) for the Ga West Municipal Assembly, Clement Wilkinson, has said that some drivers are heading in the wrong direction on the Pokuase Interchange because they refuse to read the signs.

According to him, the government has put in place measures to ensure the smooth use of the interchange, hence, drivers should be able to easily use the newly constructed interchange.

In an interview with Samuel Eshun on the Happy Morning Show, he explained: “We have put in measures to ensure the smooth use of the interchange but a lot of people do not like to read. The directions have been given. Even with the Tetteh Quarshie interchange which was not even big, people struggled to use the interchange.”

He, however, acknowledged that the structure and size of the road can cause accidents. He, thus, called on the Greater Accra Command of the Motor Traffic and Transport Department to assist in directing the cars on the interchange.

The project’s construction commenced in April 2018 and was initially expected to be completed in October 2020.

The completion date was later changed to March 2021. The government explained that the development was due to the outbreak of the Covid-19, which halted its progress.

Meanwhile, some drivers have already begun heading in the wrong direction on the interchange.