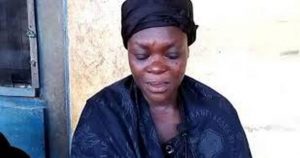 The wife of the 62-year-old man murdered at Denkyira Kyekyewere in the Central Region wants the Ghana Police Service to expedite investigations into the killing of her husband.

Ophelia Amoah wants the perpetrators to be arrested and brought to book.

His body was left with severe wounds on some parts of his body.

A co-tenant, Comfort Oforiwaa, alleged that the deceased crawled to her house with blood stains.

She claimed that Mr Zigi told her: “I’ve been attacked by unknown men in my room.”

According to her, the late Mr Zigi was taken to the Kyekyewere Hospital for treatment but he was later referred to Dunkwa Municipal Hospital where he died on the way.

Madam Amoah expressed shock over the killing of her husband and described the incident as heartbreaking.

She is, therefore, appealing to the security service to speed up investigation to unravel the killers of her husband.