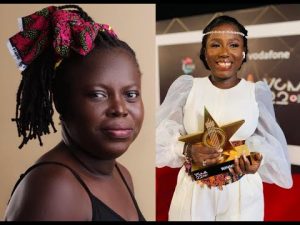 Backup singer who shot to fame, Nana Ama, has taken a swipe at Vodafone Ghana Music Awards’ (VGMA) Artiste of the Year 2021, Diana Hamilton, for not recognising the music producer who gave her the beat for her award-winning Adom song.

According to her, Diana Hamilton did well by thanking God and some of her ardent followers but taking the music producer, Shadrack Yawson’s name out of her acceptance speech wasn’t apt.

She explained that, even if she paid Mr Yawson, popularly known as Sha for the instrumentals, it would not have been bad to project him on stage because “others would also want to work with him.”

Why are some musicians so wicked?… You go on platforms and you have to appreciate the person but you think you have paid for it so appreciating it is wrong. It’s about time that changed. When I say some musicians are ungrateful people don’t understand. She didn’t even say anything… Not even thank you to Sha… Nana Ama said in a video she shared on her Facebook page.

We have to change. This is a wake-up call to musicians, engineers, instrumentalists and backup vocalists. The award you are not sharing with him… we say appreciate the person to know that you are grateful.

Thanking others is fine but if the producer didn’t add his knowledge to it, it wouldn’t be a hit… It is not a fight but I am pained that such happened to him. The hiplife and reggae artistes are able to do that but the gospel musicians, she said.

Diana Hamilton became the second female artiste to win the Artiste of the Year after Ebony Reigns won posthumously in 2018.