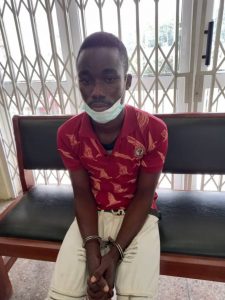 A Kibi Circuit court presided over by His Honor Peter Oppong-Boahen has convicted and sentenced a 19-year-old to 9 years imprisonment for defilement.

According to him, on February 21, 2020, at around 7:00 pm, the victim was en route to her grandmother’s together with her two sisters when they met the suspect.

The accused is said to have offered a drink to the victim, before ordering her companies to head home.

Detective Inspector Gumah told the court that the victim started feeling dizzy after taking the drink and the accused succeeded in taking the victim to his room and had sex with her while she was unconscious.

The victim, after gaining consciousness, felt pains around her vagina and saw blood oozing from her private part whiles the accused lay naked by her side.

The accused succeeded in keeping the victim overnight until the family realized the victim’s absence, for which they lodged a complaint at the police station while they proceeded for a medical report.

According to the prosecution, the medical report signed by a medical officer at the Kyebi Government hospital Dr. Ameyaw Prince Addo revealed that the victim had been abused sexually.

The police charged the accused, Kwadwo Boateng for defiling a female under 16 years of age contrary to section 101 of Act 29/60.

The accused pleaded guilty with explanation in court after denying having committed the offense at the preliminary investigation stage.

His Honor Peter Oppong- Boahen convicted and sentenced Kwadwo Boateng to 9 years imprisonment on his own plea.