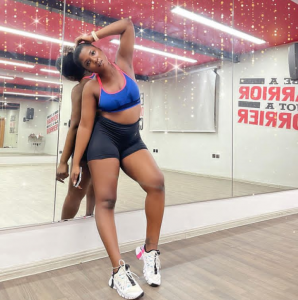 Ghanaian actress, Priscilla Opoku Agyeman, famed as Ahuofe Patri, has given her many fans and followers something to enjoy in her new post on social media.

The actress blessed her Instagram page with a new dazzling photo of herself as she strikes a pretty pose in her gym clothes. In the photo, the actress was seen leaning on the glass door of the yet-to-be-named gym while wearing a short blue-coloured tank top, a pair of tights, and white sneakers.

Ahuofe Patri was seen looking with a straight face into the camera as she leans against a huge mirror inside the gym.

The actress sported her usual low-cut hairstyle which she has been keeping for some time now.

After posting the rather pretty photos of herself, she captioned it: “New week. Let’s do this” and added some three emojis of biceps to it.

Many fans and followers of the actress took to the comment section to shower her with glowing words.