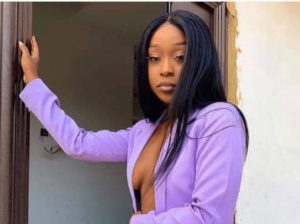 Efia Odo says that fewer people would engage in prostitution if jobs paid employees well. She said not everyone having s3x for money is genuinely interested in the trade. But they have no choice.

According to the socialite, who has added her voice to the Better Ghana Agenda, poorly paid jobs and high cost of living is greatly related to prostitution in the country. In a video that she posted on her official Twitter account, she outlined the need for everyone to join the fight against bad governance.

The actress insists that if you are against the campaign, then you are either being paid to be sensitive or suffering from mental issues. She said it is senseless to think the movement is a political agenda because people want a better life.

Efia Odo said she’s lucky because she gets freebies from running promos on her social handles, but other girls are not fortunate. “There are so many girls who want to work. Not everybody wants to do prostitution. But some people have no choice because even teachers are with 400 cedis and 700 cedis a month. People are working hard for nothing!” She said.

I have clothes on now, is the country fixed yet? #FixTheCountryNow pic.twitter.com/xi6guwubAj