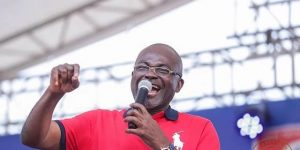 Member of Parliament for Assin Central, Kennedy Agyapong, has detailed how he used a secret recorder to get embattled fetish priestess, Nana Agradaa, to ‘confess her sins’ in his latest interview on Oman FM.

According to the lawmaker, the supposed fetish priest confessed to him and two others that she has no power to double money contrary to what she has been advertising publicly on television.

He said Agradaa made the revelation in the presence of his son and one Sarfo, saying she used to deal in second-hand clothing but life became very difficult after she banked all her hopes and invested in fetish priests and pastors who failed to help her.

The embattled priestess, he said, then took the decision to also become a fetish priestess and use her “big brain” to defraud people of their hard-earned monies.

Mr Agyapong said for the purposes of evidence, he had to record Agradaa so that in case she denies her confession to him in the future, he could play it on live television.

The Assin Central MP said he finds it difficult to understand why some Ghanaians will want to depend on fetish priests or priestesses to make money when they can get money through hard work, consistency and perseverance.

He asked the government to act in clamping down on the activities of such fraudulent people including some pastors who are also involved in such activities.

Kennedy Agyapong exposes Nana Agradaa after her arrest : "She doesn't have any powers – she only uses her brains to outsmart lazy and greedy people. Nana Agradaa even came here ".