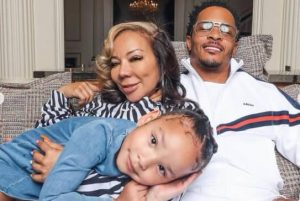 According to T.I., fathers are to be blamed if their daughter ends up becoming a loose woman. Because they did not spend enough time with them to set good examples.

Rapper Clifford Joseph Harris Jr., known as T.I. made these comments during a podcast session with 21 Savage. 21 Savage admitted that he was more protective of his daughter because he’s aware of how men treat women. And wouldn’t want the same thing happening to his daughter. T.I. interjected that it was because boys can’t get pregnant.

T.I. then proceeded to school fathers on how to prevent their children from becoming women of ill repute. For him, spending quality ti,e with their daughter would go a long way to prevent them from picking bad habits.
He said, “You have to put in those thot prevention hours to keep your daughter off the pole. So you spend time going on daddy-daughter dances, taking them on trips, and just gisting with her. Those are thot prevention hours that you are putting in. You have to do that. It is absolutely necessary for any father. If you don’t put in your thot prevention hours and your daughter ends up a dancer. Don’t blame her or call her a hothead. You didn’t set an example. You did not show what she should be doing versus what she is doing.”

Previously T.I. was criticized for his ‘obsession’ with his daughter’s virginity. He revealed that he takes his daughter on random hospital visits to check if her hymen (virginity) is broken.